According to Japanese legend, if you fold 1000 origami cranes, you will be granted a wish. But lets start with just one!

The traditional way of making 1000 paper cranes is to hang them on strings, on atop another, with 40 on each string. The string has a bead at the bottom to stop the last crane from falling off. Then you will need 25 of these strings to make up 1000 cranes. This is called a Senbazuru. 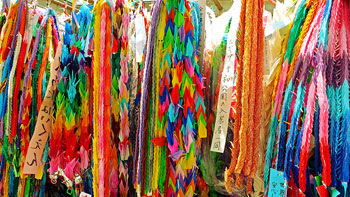 Traditionally, Senbazurus are given in Japan at weddings for good luck in the couple's lives. They are also made by girls who give them to a boy they admire!

Most people know of the 1000 cranes tradition through the tragic story of the little girl Sadako, who developed Leukaemia from the atomic bomb blast in Hiroshima in World War II. She began making her 1000 cranes in her hospital bed, but sadly died before completing them. But her classmates finished the 1000 for her after her death at age 12. This sad story has made the 1000 cranes a symbol for world peace. You can learn more about the story of Sadako, by clicking here.