Lucky origami for my friend in hospital 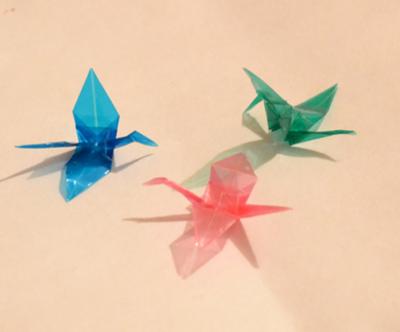 These are origami cranes

Last year I started with origami, and became very good at it, when my best friend developed a dangerous cancer soon after. Then I never enjoyed anything really to do with paper until one day I walked into her hospital room to find her with hundreds of origami projects hanging up around her room.

I thought this was much too similar to that book about the child who did that before she died, so naturally I freaked out ripping everyone of them down and breaking down. She just sat there ignoring what I had just done folding more and more things a bird then a happy face: she was talking a code, a code of origami.

I just watched astonished, it took me a while to figure out but a had worked out what she was saying, Then she said 'I believe that these will make me better' So I just hugged her for ages until I had to leave.

One month later she came out with no cancer left and no sign of it reoccurring. We still love making origami until this day, in search of more models to make :)

We are currently rebuilding the design of Origami-Fun! Don't worry, everything is still here, and we'll be done soon. If you can't find what you are looking for - please search for it.